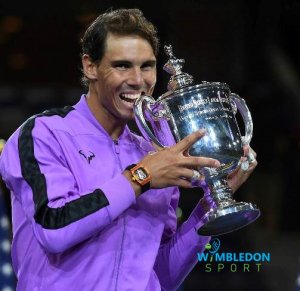 Rafael Nadal is Spanish professional tennis palyer born 3 June 1986 at Manacor (Mallorca, Spain). After Novak Djokovic in ATP ranking No. 2. He has won many titles in his name. Some of them as follows

Rafael is also known as “The King of Clay,” Rafael Nadal became the winningest French Open champion of the Open Era in 2012 with his seventh Roland Garros title. He won his first French Open in 2005, and went on to win Wimbledon in 2008 and the the Australian Open in 2009.

In 2010, the Spaniard completed the career Grand Slam by defeating Novak Djokovic in the U.S. Open final.  That year, in addition to winning in Flushing Meadows, Nadal won the French Open and Wimbledon. In 2008, Nadal won a gold medal in singles at the Summer Olympics in Beijing.

As strong as any player on tour, Nadal plays a behind-the-baseline game and hits heavy, topspin ground strokes. He’s speedy, consistent and covers the court as well as anyone in the world. Nadal, with his incredible athleticism and defensive skills, has long established himself as one of the most exciting players in tennis.