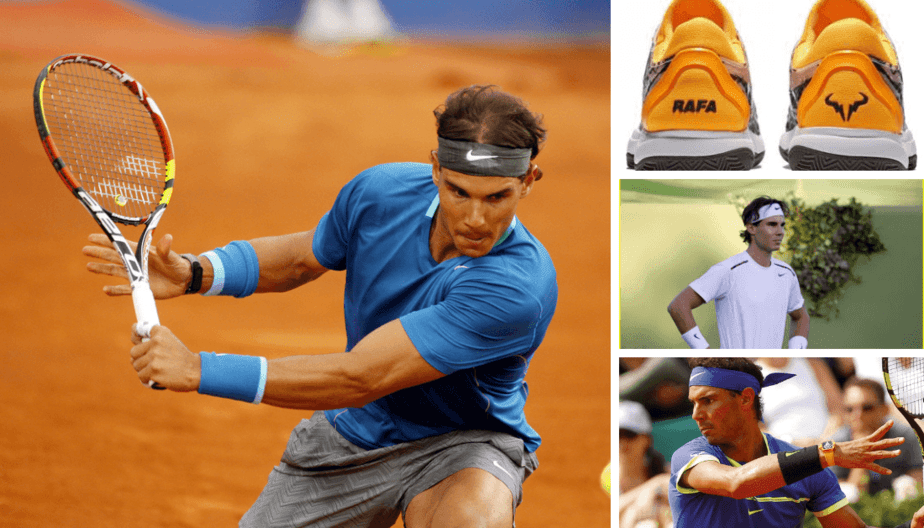 Rafael Nadal Parera is a professional, well-known, and currently ranked number 2 tennis player in men’s tennis. He turned pro in 2001 (two years before Novak) and became a left-handed player. We have covered sponsors and net worth Rafael Nadal in 2022.

He is famously known as the King of Clay as he has won 13 French Open titles out of a total of 86 winnings.

Tennis brands tend to sponsor top professionals for their product exposure especially new products to a wider and more targeted audience. The sponsorship’s deals in return boost their business and sales more than their investments.

All massive tennis sports events are great marketing and advertising tools for tennis brands, that’s why they approach top tennis athletes to cover each event.

Following is the list of brands that Rafael Nadal endorses and gets a huge mone. We’ll share his current/active and past sponsors’ history. According to Forbes in the year 2020 Rafa earned $40 million in which the prize money is $14 million, and endorsement earnings are $26 million.

The equipment of the Rafael Nadal mentioned above comprises the gear for 2021 and in the future.

In fact, he is playing with the Aero Pro Drive racquet which is the paint job of Babolat Pure Aero for resemblance along with Cortex GT.

The reason according to the brand to use this racquet is the heavy topspin, and the power generated that suits the playing style of Nadal.

The famous clothing and shoe brand Nike has contracted with Rafel Nadal for shoes and clothing and both parties keep it private. When Rafael was asked about the renewal of the contract with Nike, he said it is a private matter for him and doesn’t want public details.

The clothing brand signed a contract with him for ten years back in 2008 and reportedly continues to endorse it for next, as he is wearing Nike’s clothes.

Rafael Nadal is endorsing Richard Mille watches and wearing the latest model RM 27-04 Tourbillon. In the beginning, when RM approached him he was quite reluctant to wear a watch, especially on the court.

When the R&D team met with Rafa the first time he was reluctant to wear a watch and then they have developed the lightest merely 20 grams special watch model and presents it to him in his house.

The Clay king expressed his feeling in the words “It is just like a second skin for me”, as the watch is quite lightweight and skinny to wear. You can explore the lithium and titanium-made RM watch here and check availability from the link below.

Richard Mille is a swiss watch luxury maker and they contracted with Rafa back in 2010 as the brand ambassador. The worth of hi RM watches is the US $525,000 and $725,000, one of the most expensive watches in the world.

The renowned Banco Santander is a Spanish company and offers banking and other financial services based in Madrid and Santander. The Santander Group signed a long-term sponsorship deal with Rafael Nadal on the last day of 2019.

The bank appointed him a brand ambassador but details of the sponsorship contract were not announced by both parties.

KIA Motors is a South Korean multinational automotive manufacturer that sponsors Nadal. The car brand has sponsored him since 2006 when he was a junior tennis player.

The Initial KIA-Nadal partnership was signed in 2004 and it continued for the long term. The partnership was renewed in May 2015 for the next five years during a ceremony in Madrid, Spain.

Korean brand nominated him as the face of the company across the electronic media platforms to promote the company on TV ads, social media campaigns, print media, and major international motor shows including the Australian Open of 2020.

The Italian luxury Fashion house manages Nadal’s of-court looks. The fashion brand works under the umbrella of Giorgio Armani (founder as well) Group of companies and has several other brands of different industries. Emporio Armani is its clothing brand that is sponsoring Nadal for its outlook.

The tennis star appeared in Armani ads and unveiled Emporio Armani’s underwear in 2011. Fans of Nadal took it as a surprise and shocking to see him wearing underwear only, as most of the fan base knew him as reserved and shy nature.

He is the first tennis player to endorse this fashion brand, as the brand was endorsed by  David Beckham and Ronaldo in football. Nadal has a long-term deal with Armani.

Telefonica is a Madrid-based Spanish telecommunication company endorsed by Rafael Nadal. It provides its telephony and mobile services in Asia, the USA, and Europe.

Rafael Nadal was appointed as a brand ambassador and their sponsorship pact started in 2014.

The telecom brand has other subsidiaries for different regions of the world like Movistar, O2, and Vivo. It might be interesting to know that its Movistar subsidiary has helped the tennis star to establish his tennis academy at Manacor and named it “Rafa Nadal Academy by Movistar”.

Mapfre is another Nadal countryman brand that offers life and property insurance service. Nadal had a long-term sponsorship deal with Mapfre as they have celebrated their 10th anniversary in May of 2020.

The insurance company renewed the endorsement deal in April of 2017 for the next two years and kept a one-year extension optional.

Cantabria Labs has contracted with Nadal to Promote its skincare products under the tagline of “Give Your All for What Matters Never to the Sun”. The brand encourages a healthy lifestyle while keeping you under sunshine. The endorsement deal was signed in May of 2019.

The Rafael Nadal foundation and  Rafa Nadal tennis Academy are also part of the deal. Heliocare did not reveal financial terms and duration in its press release.

PokerStars is among the sponsors of Rafael Nadal that help Nadal to raise his net worth. Rafa joined the largest online poker company PokerStars in June 2011 which is an online poker cardroom owned by The Stars Group.

The contract was signed for the next two years with one optional one-year extension and the worth of the deal was €12 million.

In October 2015 the deal came to an end as PokerStar changed the strategy and sport to football.

Past Sponsors of Rafael Nadal

Rafael Nadal has dropped a few sponsors or a few brands did not extend their sponsorship deal with the tennis star. The list of those sponsors includes Tommy Hilfiger, Armani, Banco Sabadell, and Mueller Sports Medicine.

The worth of the deal was $2-3 million for the duration of two years. The appearance of Nadal was meant to launch for underwear and tailored collections in different North America, Europe, and Asia.

The banking and financial services company sponsored the tennis athlete and Nadal was picked as brand ambassador for the bank. The contract was signed for five years in 2014 and ended in 2019.

As the name suggests Muller sells sports medicine for the athletes. The band signed a sponsorship deal in 2014 for the next 3 years. While in the contract Rafa has to endorse their abrasion control products for term duration.

The contract expired in 2017 and reportedly wasn’t renewed. He was wearing Muller strips before the brand approached him, which might be the reason not to renew the contract.

The Lavin is a brand under Inter Parfums baked in Paris and designate him as their global brand ambassador. Rafael signed a deal with Lavin perfumes in October 2008 to develop a new perfume line and launch it in the summer of 2009.

The product line was marketed for younger customers with the name of “Lanvin L’Homme Sport” perfume.

Businesses and Investments of Nadal

Rafael Nadal is increasing his net worth from sponsors and businesses as well. The top-ranked tennis player earns a hefty amount from sponsors, prize money, and other sources including his investments in different businesses.

The king of clay opened his tennis academy at his hometown Manacor in 2016 with the help of Movistar which is a subsidiary of his telecom sponsor Telefonica.

The academy is a part of Rafael Nadal Sports center that is a residential sports complex for young talent that has a school inside as well that helps children to continue tennis and education.

This sports center comprises 26 tennis courts, squash courts, a museum, a fitness center with a spa and cafe, football grounds, swimming pools, and other sports arenas.

The first restaurant was launched in 2017 at Madrid, and other locations are Ibiza, Beverly Hills (Nics Martini Restaurant), Philadelphia(Boyd Theater).

Nadal has bought his first luxury Italian MCY 76 yacht and later sold it for $3 Million to feel relaxed in his leisure time. He has also bought the Sunreef Catamaran yacht in 2020 to continue his hobby.

You can explore wooden models of the yacht to decorate your living spaces, as everyone is not as rich as to afford Nadal’s hobby.

Although he is living in a luxury house in his hometown  Manacor, he has invested in the real estate business. He has bought a 19th-century building located at a prime location in Madrid having $30 million worth.

Rafael Nadal has built a lavish house with the help of sponsors and net worth.

The House of Spanish raging bull is just another investment of his house. He owns multiple homes worth a million dollars. The Mallorca home is worth $1.5 million along with a luxury villa in the Dominican Republic that has $2 million worth.

He owns Mercedes-Benz SL55 and Aston Martin DBS, the highly expensive cars in the world. The starting price of Mercesez is $223,000 and $517,000 for Aston Martin.

Rafael Nadal also partnered with his telecom sponsor Telefonica’s “Open Future” startup incubator campaign to support new entrepreneurs to establish their businesses through fundings. The aim of this partnership was to introduce tech-supported startups for Rafael Nadal’s sports center and academy.

The Spaniard would offer almost $160,000 for the approved startups.

The Net Worth of Rafael Nadal – Career Earnings

The net worth of Rafa in 2020 is $40M that breaks apart as  $14 million prize money of winnings/salary earnings and $26 million as the sponsorship money, other appearance fees, etc.

His net worth at the start of 2021 is approximated as $200 million according to the celebrities’ net worth. According to other sources, it varies from $170-190 million as of the last year 2020.

He won a total of $123 million prize money as a professional tennis player since he got pro, according to ATP. Let’s have a look at the net worth chart of Rafael Nadal has earned from sponsors and prize money.

Rafael Nadal has a humble personality and often donates and helps people in need through the foundation, charity matches, and fund-raise campaigns. The charity work continues with the help of Rafael Nadal sponsors and net worth as it is not always about gathering money.

The Rafael Nadal Foundation “Fundación Rafa Nadal” works in India and Spain for most underprivileged people in the world through education and sports.

He helped and supported the Red Cross to raise $10 million for Spanish people affected by the Covid-19 pandemic. The Rafel Nadal Foundation helped Indian people through ration distribution.

When Mallorca was hit by floods in October 2018 he accommodated flood-affected people in his tennis academy and also donated €1 million for the rehabilitation of the most flood-affected Sant Llorenç des Cardassar island. He also helped to organize fundraising events for flood affectees.

The EJ Aids foundation works for HIV/AIDS-affected people’s care and support in 55 countries including the USA and UK.

2 thoughts on “Rafael Nadal Sponsors, Net worth, Business, and Charity 2022”