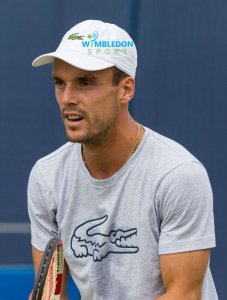 Roberto Bautista is spanish professional tennis player who started playing at age of 5. He got media’s foucus and fans were excited when he qulaified to semi final in Wimbledon 2019 chamionship.

He has also played football for some time but continued his tennis carrier as profession. If he could not succeed in tennis he would be a good football player. He was also named in 2014 as most improved player of the Year by ATP.

He is horse lover and horse riding, that’s why owns 7 horses. He supports illarreal C.F. and C.D. Castellon. football clubs.

November 2019 was hard for him as his father has passed away, his marriage was also occurred in the same month. Mother died in May 2018.

Interestingly when he qualified to Semi-final in Wimbledon 2019 unexpectedly, his bachelor party was scheduled that he has to move to London. He has also qualified to Quarter Final in Australian Open 2019.